Awesome Golf Games You Can Play During Your Next Round Looking for a way to spice up your golf outing? Here are several fun and popular games you can play to make that next round more competitive and fun with your best-golfing buddies.

This is a great team game, particularly if you're new to the game! Two players make a team. Each player tees off. The best ball of the two is selected and the other player moves their ball to that location, where both players again hit their shots. The best shot is again selected and this continues until the ball is holed. One score is recorded for the team.

This game works well for parents and their children, husbands and wives and anyone who wants to have fun playing as a team. It also helps players, play quickly and keep up with the pace of play on busy days. This is a popular format used for our weekly 2 and 4 person 9-hole leagues and is always a favorite with new and seasoned golfers!

Get four players together, with each playing independently for one goal: Have the most points at the end of the round. The first tee sets the order of play, with the last person being the "Wolf." Each round is rotated so that every player has the opportunity to be the "Wolf" once every four holes. When each player has hit his/her tee shot, the Wolf then decides if he will take any of the players to his team for the hole. If the Wolf decides against taking a player, he will be dubbed the "Lone Wolf," and the objective changes to beat the other three players by getting the lowest net score on the hole. If the Wolf does decide to choose a partner and they win the hole, both players will receive two points. However, if non-Wolf players win the hole, they each gain three points to add to their game. If the Lone Wolf beats everyone, he or she is granted four points – but if he or she is beaten by any other player, everyone apart from the wolf gains a single point. While this game takes a lot of concentration, it's a great game to play, and you can add variating rules to make it more interesting!

Sixes (also known as Round Robin or Hollywood)

This is a great game for four players. You play against one another 2 versus 2. Every six holes, you rotate the playing partner, and after 18 holes, the other three players should have at one point been your partner for six holes. Use the scoring format in sixes – whichever you prefer - with each six-hole serving as a separate bet. The winner is the player who has been on the winning side for at least two matches.

For the sake of simplicity, label each golfer 1, 2, 3 or 4. So the order should be as follows:

Rabbit (a variation of the popular Skins game)

First off, decide if you will do two 9 hole bets or the full 18 hole bet. In this game, the first player to have the lowest score on a hole – with or without handicaps – captures the Rabbit. No ties are allowed here, and on the next hole, another player other than the holder of the Rabbit receives the lowest score. The Rabbit is then set loose. On each hole, every player has an opportunity to capture the Rabbit, but only after it has been set free by another player. Make bets for fun to raise the stakes! 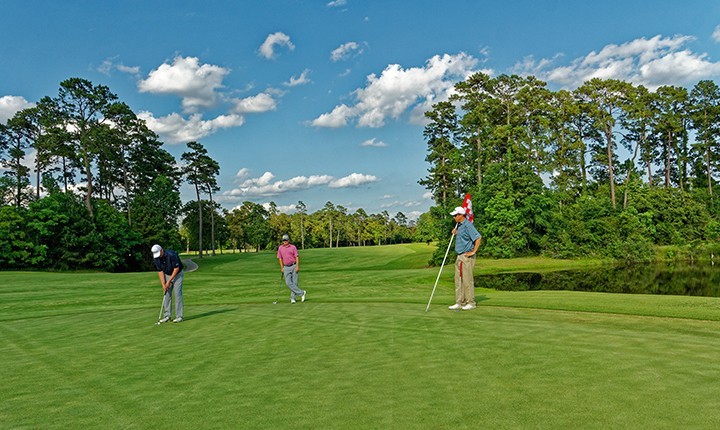 One of the most popular games to play starts with two-person teams with each player playing out his or her golf ball. This game format is most notably seen displayed in the biennial professional men's golf competition, the Ryder Cup, where teams from the United States compete against teams from Europe. After every hole, the lowest score will be recorded by the team and counted towards the overall team tally. The highest score is thrown out!

Take handicaps into consideration, so that the weaker players received strokes on some holes. This game is also great to speed up a game, as it becomes clear that a player will not have the best ball for a hole, allowing them to pick up, thus speeding up the game.

A betting game for all! Skins is a game where prize money is played for on every hole. For each hole, assign a point-value or dollar amount, so that each player in the group puts in an undetermined amount for the "kitty."

As always, the lowest score wins the skin, but if another player ties for a hole, the skin carries over into the next hole. The player that wins the hole outright is the winner of the skin and any others that were carried over from previous holes. What's awesome about this game is that even you have a rough start, but win a hole later on in the game, you get all the skins that have carried over.

Playing a 3-some? This is your ideal game. Spin a tee before you start your round of golf to get the order of the group (first, second, third). The first player tees off on hole number one and is the Captain for the first three holes. Player one competes against the other two players for a low net match. Then holes four to six, the second player becomes the Captain and so on for 9 or 18 holes. You can make each match worth whatever you like with this format.

Another popular game for 3-somes. Each hole has nine points available. The lowest net score gets five points, the next lowest gets three and the highest gets one point. If there is a tie for the low score, the point distribution would be 4-4-1: a tie for high score would be 5-2-2 and a three-way tie would be 3-3-3.

Spin a tee to start and determine the order. Player one is The Dude on hole one, player two is the Dude on hole two, and so on. On each hole all players tee off and then the Dude plays a second ball that is distinguishable from the first ball. The Dude plays both golf balls through the hole and his or her lower net score from the two balls will go against the low net score from the other two players. When you're the Dude, you have twice the chance to win, making it fun because we all know that "second shot" is always better.

By accepting you will be accessing a service provided by a third-party external to https://www.lozanogolfcenter.com/